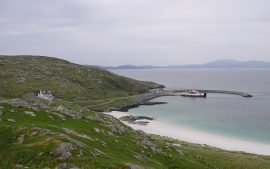 An Amazing (if Windy) Trip

One of the most memorable routes I have ever cycled in Scotland is the Outer Hebrides route.

May is always a great month for cycling in Scotland and it seemed the ideal time to organise a trip to the Outer Hebrides with a few friends for our annual outing.

The five day itinerary was as follows:

Day 1 – Train from Glasgow to Oban and catch the ferry to Barra for an overnight stay there – little or no cycling and letting the train and the ferry do the work.

Day 2 – Cycle round Barra to catch the ferry to Eriskay on South Uist before cycling north to our digs at Lochmaddy on North Uist – Approx 57 miles.

Day 3 – Cycle to Berneray to catch the ferry to Leverburgh, South Harris for an overnight stop just outside Tarbert, North Harris – Approx 32 miles.

Day 4 – Continue north to Lewis and then strike out west to Callanish on the west coast of Lewis for an overnight stay within sight of the famous Standing Stones – Approx 39 miles.

Day 5 – Cycle east to Stornoway in order to catch the ferry to Ullapool on the mainland for onward transportation back to Glasgow – Approx 16 miles.

We were carrying our own gear and we thought we knew what direction the wind was supposed to blow (apparently the prevailing wind is from the south-west) which is why we were doing the trip in this direction so it promised to be a real mix of easy and hard days….

Our meeting point was Glasgow Queen Street station to catch the train to Oban. It was a holiday weekend and our bikes had been booked on the train so, unlike others, we avoided any last minute negotiation with the train manager about getting our bikes on board. A spot of lunch on arrival in Oban where we also met the final member of our group – there were now six of us! Purchasing our Hopscotch tickets from the Calmac office we boarded the ferry for the sail out to Barra and the opportunity to see Kisimul Castle which appears to float in the water as you come into Castlebay. I had been informed there was a local wedding taking place that weekend so accommodation was limited. As a result we were booked into a couple of different B&Bs in Castlebay and on Vatersay. 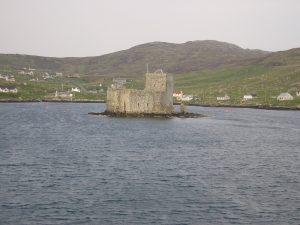 The next morning was the ‘real’ start of our cycling tour, a toss of a coin determined that we would cycle anti-clockwise round the island to the ferry terminal which links Barra to Eriskay on South Uist so it was a brisk climb out of Castlebay after breakfast.  As the ferry headed over to South Uist, we could see the famous beach which is used as a runway for the small planes which fly to Barra from the mainland (sounds like a nice day trip from Glasgow….).

Heading away from the ferry terminal at Eriskay, we experienced the first of a number of causeways of the trip. We also discovered that the wind had decided to ignore conventional wisdom and blow from the north east against our general direction of travel. At least it was dry, as testified by the horizontal washing on the drying lines outside the houses we passed! There were no big hills or descents but there was also limited cover from the wind so any stops to regroup had to take place within the shelter of any available stone wall. We traversed more causeways as we headed up through South Uist, Benbecula and North Uist, it was here I first spotted my favourite road sign of the trip – Otters Crossing! Later that day, at our evening meal in a local hotel not far from our digs in Lochmaddy, we all agreed it had been a tough long day in the wind but worth it with the beautiful views and spectacular beaches. 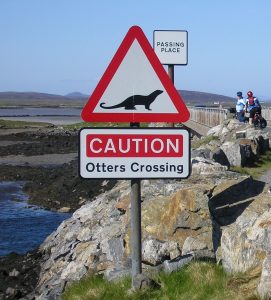 We left Lochmaddy the next day in order to catch the ferry from Berneray to Leverburgh over the Sound of Harris. On the way to the ferry we had an opportunity to stop off and admire the stunning white sands and blue water of the beach at Hornais. Ignoring the freezing water and constant wind, with those colours we could have easily thought we were in the Caribbean. We could have stayed there for the day but we had a ferry to catch! As the ferry picked its way through the rocks and small isles of the Sound of Harris we could see the rolling hills of Harris in the distance. A crew member reminded us it was a Sunday which meant most shops might be closed so we topped up our rations from a vending machine which turned out to be a wise move.

Although the north east wind was still with us, the sky was blue and the sun was out as we headed for our overnight stay in Tarbert passing more stunning beaches on our way. There were more up-hills and descents compared to the Uists but the hills offered us a degree of shelter from the wind. Our party was spread across a couple of B&Bs just outside Tarbert. The B&B who I booked with had also pre-booked us into a local hotel for the evening meal as it was a Sunday and evening meal options were limited. Another exceptional day! 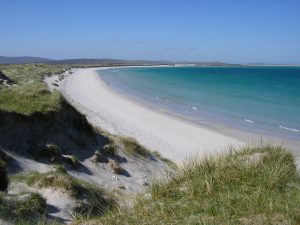 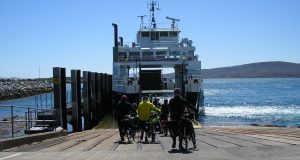 but we had a ferry to catch

The long climb out of Tarbert the next morning was a bit of a shock to our system but once again the sky was blue most likely thanks to our friend the wind moving any clouds along. Leaving the coast we headed up through North Harris and into the different landscape of Lewis. We were still making use of stone walls to stop and regroup out of the wind but found that bus shelters could also come in handy for the same purpose! We were due to stay the night at a local B&B not far from the Standing Stones of Callanish so, several miles south of Stornoway, we struck out west and, for the first time, had the wind at our backs so we really flew along the road to Callanish. After dinner at the B&B we walked up to the Standing Stones in the dusk to watch the sun go down which was just a brilliant finish to our day. 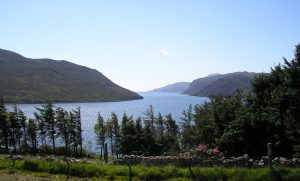 Another stunning view from our route 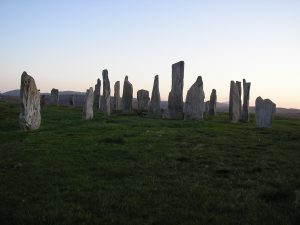 The Standing Stones of Callanish

Callanish to Stornoway and back to Glasgow

Our last morning was an ‘easy’ cycle back east across bogland with the occasional peat stack to Stornoway via a minor road called the Pentland Road in order to catch the ferry back to the mainland. Some of our group opted to take their bikes on the bus back to Stornoway rather than face the wind again. Despite the wind blowing into our face, it was another beautiful dry day and the road was virtually traffic free. 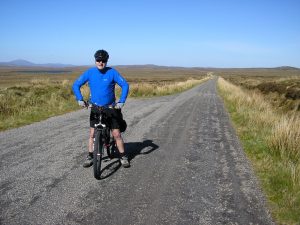 On the Pentland Road 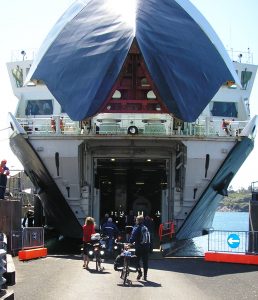 Ferry to the mainland

Arriving in plenty of time to have a walk round Stornoway and grab some lunch, we caught the afternoon ferry back to Ullapool. The highlight of the ferry trip to Ullapool was seeing the coastguard helicopter carry out a training exercise alongside the ferry. Arriving in Ullapool we were picked up and transported, along with our bikes, back to Glasgow that evening by the cycle transport company I had booked.

Altogether, an amazing few days with lots of memories.

Were we grateful for the good weather and no rain? Yes!

Would we do it again? Yes! (well I would)

In fact I went back to Harris the following October with my family to show, and share with them, the delights of these fantastic islands. Not something I would do after some other cycling trips I have been on…..