Tougher by canal than by road?

A lot of people may be familiar with the route taken by the Pedal for Scotland Glasgow to Edinburgh ride which takes place each year in September. An alternative route (and I would argue a tougher one if you do the entire route) is via the Sustrans Routes 754 and Route 75 which runs from city centre to city centre alongside the Forth & Clyde Canal and the Union Canal. It is possible to start at any number of points in Glasgow but on the day we did it last year, we were dropped off at Speirs Wharf in Glasgow.  Speirs Wharf is a converted warehouse which sits just north of (and above) the M8 at J16 and is sited on a branch of the main Forth & Clyde Canal. 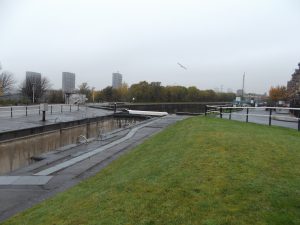 Starting in a generally north west direction along the canal branch from Speirs Wharf we cycled by and could see into Firhill Stadium (the home of Partick Thistle Football Club) in Maryhill – there was no match on that day so we cycled on. It was just after this we caught our first puncture of the day from a small piece of glass embedded in the tyre.  After a quick repair, a mile or so later we joined the main Forth & Clyde Canal at the Stockingfield Junction. To do so we had to leave the canal path we were on and go under the canal via a small road tunnel to then join the main canal on its north bank – it is signposted but you can miss it if you are not looking out for it.

From here the canal heads in a north easterly direction through or by a number of different areas in Glasgow such as Lambhill, Milton and Bishopbriggs. It then reaches Kirkintilloch which, with its main street and seating areas, was a good opportunity for the first refreshment stop of the day.

Continuing on, we headed towards Auchinstarry Basin with its collection of colourful canal boats tied up at the marina and the opportunity to have a look at the remains of the Antonine Wall built by the Romans – it was raining so we pushed on. We settled into a steady pace in the open countryside although the constant rain meant that we were catching quite a lot of grit from the path on the bikes and our clothes.

Heading for the Falkirk Wheel, at the Castlecary Arches we passed under the M80 motorway which is the main road north from Glasgow and in turn passes under the main Glasgow to Edinburgh railway line. By this point we had picked up our second puncture of the day – the repair from the first puncture appeared to have failed giving us a slow puncture which we pumped up every few miles until we reached our planned lunch stop at the Falkirk Wheel. Thankfully, it had now stopped raining and the marina area was busy with visitors taking a trip on the wheel so it was good to take a break, replace the inner tube and watch the wheel in action. 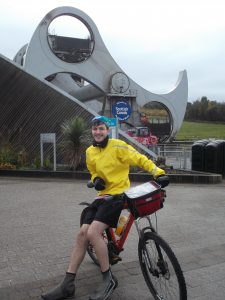 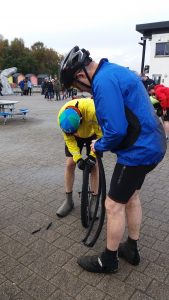 Fed, watered, revived and with the new inner tube in place we left the Forth & Clyde Canal and headed uphill to join the Union Canal (but still following Route 754). There is a short tunnel just above the Falkirk Wheel where the boats are controlled by traffic lights. However there was a much longer tunnel a few miles later when we got closer to Falkirk town centre. This second tunnel was over 600m long and, although it was lit, it was useful having a light on the bike to negotiate the puddles and people we met on the way through it.

Continuing on from Falkirk and through Polmont we moved out into countryside again. Just before Linlithgow we cycled across the Avon Aqueduct which, for me, was the highlight of the whole day. Apparently the 2nd longest aqueduct in the UK at 247m long, built of stone and designed by Telford. Officially it is 25.9m high but it felt higher than that when I looked over. The challenge is not to wobble too much as you cycle over the cobbled towpath with the canal on one side and the railing & drop on the other. It might be sensible to dismount and walk particularly if there are people coming in the other direction. The aqueduct is definitely worth a stop to have a look at anyway!

Passing by the Linlithgow Canal Centre, we could see the unique aluminium crown of St Michael’s Parish Church next to Linlithgow Palace. Aware of our time, we continued on and the route started to head south east through the countryside, dropping south towards Broxburn which was our next planned refreshment stop. However before we made it to Broxburn and, not far from the large red coal-bings you can see from the M8, we picked up our 3rd puncture of the day – this time a thorn embedded in the tyre.

Our stop at Broxburn was at the right time for us – although it had remained dry since Falkirk, our wrists, forearms and behinds were beginning to ache from the constant juddering due to the uneven surface of the canal path. After food and a short rest we set off on the final leg of the day – next stop was Fountainbridge in Edinburgh where we had arranged to be picked up for our transport home. In addition, as we got closer to Edinburgh, the surface would change to tarmac which was welcome news for our aching bits!

The route out of Broxburn then took us under the M8 motorway, out to Ratho Marina (which has been nicely incorporated into a new housing development) and then under the Edinburgh bypass not far from Hermiston Gait although it still felt rural. Sustrans Route 754 which we had followed from Glasgow then joined Route 75 just after Wester Hailes for the final urban run into the end of the canal at Lochrin Basin, Edinburgh Quay just to the south of Edinburgh Castle.

There is an option to follow Route 75 to Leith by cycling through Edinburgh but our transport home met us at the end of the canal giving a day’s trip of approx 56 miles. As we loaded up the bikes onto the bike carriers, we realised we had a fourth and final puncture (albeit a slow one) – turned out we had not managed to remove all of the thorn from the tyre when we had the previous puncture! 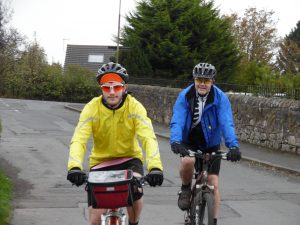 So, is it a tougher ride than the road route taken, for example, by the Pedal for Scotland Glasgow to Edinburgh event?

Aside from the fact it is a greater distance then, yes, I think it is (although the canal route obviously could not take that volume of riders).

Why tougher? Well, although it is mostly flat, you are pedalling constantly, rarely freewheeling, outside the cities the surface is mostly uneven ash/gravel so there is a constant judder even with front shocks and, from our experience, there is more likelihood of punctures….

However, having done both, I also think that the canal route is safer (unless you are riding on closed roads) and has more points of interest such as the Falkirk Wheel and the Avon Aqueduct. For those with younger families, you might want to think about breaking it up into different sections across different days rather than trying to do it all in the one day.

Give it a try yourself and see what you think!

Here are a few links related to above: