SLM Cycle Transport was recently asked to provide cycle transport and ongoing daily support for a group of cyclists doing the Caledonia Way (also known as Sustrans Route 78) from Campbeltown to Inverness. 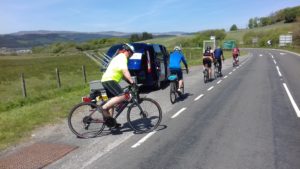 The route covers approx 235 miles through some fantastic Scottish scenery following the Kintyre Peninsula and the Great Glen with a finish at Inverness Castle. En route it passes by or through many well known Scottish locations such as Loch Awe, Oban, Fort William, Ben Nevis, Neptune’s Staircase at Fort Augustus and Loch Ness. It also includes a couple of short ferry crossings to wisely keep cyclists off the busy A82. It provides a mix of on road cycling mostly avoiding busy roads with some traffic free paths including a gravel section north of Fort William. The run into Inverness then takes the ‘B’ road on the east side of Loch Ness which again avoids the busy A82.

We picked up our group of cyclists from Leicestershire and transported them and their bikes to Campbeltown on the Kintyre Peninsula. The journey took most of the day but the best part was a stop at Inveraray where everyone piled out the minibus and headed to the fish & chip shop and had their fish supper in the early evening sun on the shore of Loch Fyne.

The next morning the forecast for Day 1 was good so the wet weather gear was stowed along with the luggage and the sunglasses were on. The group left Campbeltown and headed up the east coast of the Kintyre Peninsula before switching over to the west coast not far from Tarbert. Our job was to transfer the luggage and meet them for a lunch stop just south of Kennacraig where the Calmac ferry leaves for Islay.

Fed and watered, the guys headed off with the overnight stop planned for a B&B just to the north of Lochgilphead. Arriving later that afternoon after approx 71 miles, it was considered a long day with lots of hills. Just for the fun of it though, one keen member of the group had diverted off to the nearby red graded Firetower Trail at Achnabreac en route to the B&B.

Another sunny day so this time most of the jackets were stowed with the luggage and the suncream was applied.

A lunch stop was planned by the group for somewhere along the west side of Loch Awe so we headed to Oban to drop off the luggage at the next B&B. We then headed back down to meet the group at Taynuilt for a ‘coffee/tea & munchies’ stop before they completed the final section of the day into Oban.

At approx 50 miles with quite a few hilly sections it was another tough but enjoyable day for the group.

This was planned to be a ‘shorter’ day at approx 48 miles although, as we will find out later, it didn’t turn out to be quite that. It was also ‘ferry’ day where the group would avoid the busy A82 between the Corran Ferry and Fort William by using the Corran & Cambusnagaul ferries to cycle along a quiet single-track road on the west side of Loch Linnhe. We met the group at the Corran ferry for a lunch stop before they made the short crossing over Loch Linnhe. The decision was then made by the group that, in order to reduce the mileage on the next (and final) day into Inverness, they would aim for Laggan Locks that evening.

We then dropped the luggage at the accommodation in Fort William before heading to Laggan Locks in order to transport the group and their bikes back to the accommodation. A later than expected finish that day for the guys and those on road tyres found the gravel track along the west  side of Loch Lochy tough going and unforgiving (no punctures though).

The ‘shorter’ day had turned into one of approx 70 miles but at least that gravel section alongside Loch Lochy was out of the way!

In the morning we transported the group and their bikes to Laggan Locks so that they could start where they had finished the previous evening. The wind had mostly been in their favour all week but today it was coming from the north east, right into their faces although thankfully no rain was expected.

They followed the canal to Neptune’s Staircase (a series of canal locks) at Fort Augustus before switching to the east side of Loch Ness to again avoid the busy A82. There is a big hill out of Fort Augustus but the road then gradually drops down and then ‘undulates’ along the loch side.

The lunch stop on the final day was planned for Foyers before the final run into Inverness and the end point at Inverness  Castle.

Compared to the other days, the last day was the shortest day at approx 44 miles but no less tough.  Although no medals were provided on completion the reward was cans of coke, a wee bottle of bubbly and some world famous Tunnock’s Teacakes…..well done the guys from Leicestershire!

If you are planning on cycling the Caledonia Way and you think SLM Cycle Transport can help then please just get in touch with us.