A customer had mentioned the Scottish Coast to Coast route from Annan to South Queensferry to me. Intrigued, I decided to try it out after purchasing a guide book ‘The Ultimate Scottish C2C Guide’ by Richard Peace. I also persuaded my son to join me. We understood that, give or take a few sections where there were alternative tarmac options, this C2C could be done on any type of bike. We opted to take a road bike and a hardtail mountain bike to see how true this was. 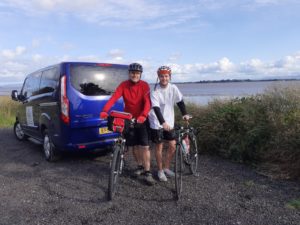 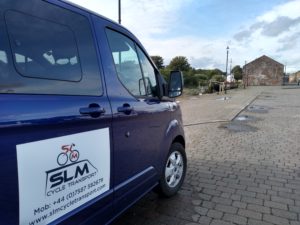 Our start point was on the Solway Estuary which felt slightly more picturesque than the alternative start point from the Harbour. The Harbour area start point does however offer easier access for vehicles since the car park at the estuary start point is very small. Following the route guide, we headed back up to the High Street and out of Annan over the bridge after passing the Bluebell Inn (which really did have a blue bell outside).

We were looking out for the blue C2C Thistle signs but didn’t really spot any until we crossed the bridge and came to the junction for Brydekirk. At this point, there is an option to go a longer route via Dumfries and the Forest of Ae (this adds an extra 20 miles). However having started out at 5pm, we were hoping to get to Moffat before it got too dark so we stuck with the more direct route.

The C2C thistle signs were generally easy to spot at most junctions, although we had to refer to the route map in the book occasionally. Over the next few days, I also became quite proficient at sliding the book out of the map cover on my handlebar bag, turning the page and sliding it back in again while cycling – however, this is obviously NOT to be recommended unless you are prepared for the occasional trip into a ditch or worse….. which I managed to avoid. 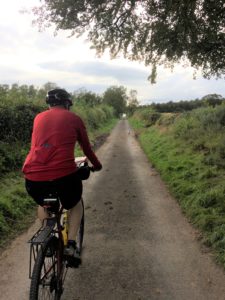 The route took us along small countryside roads as we skirted south east of the towns of Ecclefechan and Lockerbie. The surfaces were mostly fine with the occasional pothole or stretch of rough surface so it was ok for a road bike and no problem with a hardtail. Traffic was very light and we passed fields with combines, graveyards, ruined churches and a few times we came across pheasants which ran up the road in their usual demented fashion before nipping off into the hedgerows.

There were no significant climbs or descents, just nice quiet rolling countryside roads. There is a small straight stretch on the B7076 NCN74 that runs alongside the M74 and we were glad of the marked cycle lane as the vehicles passed at speed. Darkness fell as we turned right off the NCN74 to Newton and we had to switch on our lights for the final few miles into Moffat. Cycling in the dark on the quiet country roads was enjoyable and we actually felt quite safe because we could easily see vehicles approaching. The biggest problem was watching for any potholes or gravel patches. We arrived in Moffat about 9pm – food options were limited so we headed to the Best Fish and Chips Shop at the top of the High Street for our well earned suppers! We then had a comfy overnight stay at a B&B just round the corner.

We left the B&B the next morning at 10am and took the A701 road option out of Moffat. There is an off road option out of Moffat but, given we had a road bike, we decided to stick to the road. We hauled up the hill out of Moffat for about 5 miles before we arrived at the top of the Devil’s Beeftub followed by the highest point of the C2C. It was also really misty and a bit wet all the way up and even at the viewpoint the mist was swirling around, occasionally opening a short window to see the hill on the other side. 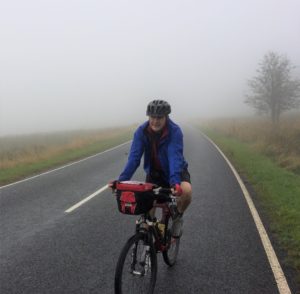 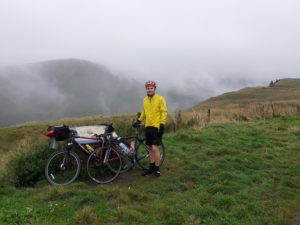 Being too wet and cold to hang about for long at the top, we headed down towards Broughton, passing the source of the Tweed and following the river downhill. Fortunately we had a tail wind so there was lots of freewheeling at this point – payback for that climb out of Moffat.

At this point in time, Broughton appears to be the only possible tea/coffee stop. However, we followed the route and took a right about a mile before Broughton and had our own lunch stop just along the road at Rachan Mill on the B712. As before, the C2C thistle signs were present although not always visible so the route maps in the guide book came in very handy.

After lunch, the run into Peebles took us by Dawyck Gardens and Stobo Castle (we decided to forgo the option of a leg massage and push on…). There were a few climbs but nothing compared to the climb first thing in the morning. From this point on we were cycling on quiet countryside roads and the surface was good. As we approached Peebles the route kept us away from the busy A72. There is a slightly complicated section just before Peebles but it is well signposted and good directions are given in the book. We arrived in Peebles just south of the River Tweed before heading up over the bridge and along the High Street. 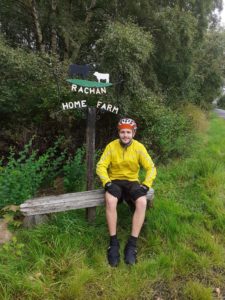 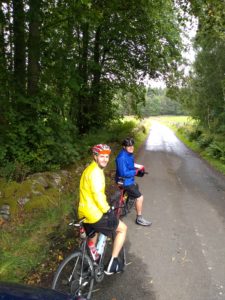 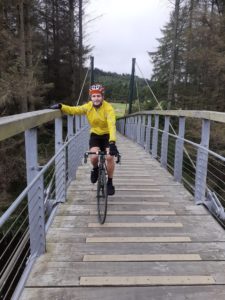 As we headed out of Peebles towards Glentress we joined and followed the smooth cycle path (a former railway route) to Innerleithen. To get to it, take the Peebles Hydro deliveries route opposite the football ground of Tweeddale Rovers AFC. This signposted route to Glentress & Innnerleithen runs alongside the Cardrona Hotel golf course and crosses the River Tweed a couple of times before arriving in the village of Innerleithen.

We arrived at Innerleithen just after 4pm and there were plenty of options locally for a meal and somewhere to stay.

We started from Innerleithen the next morning and headed up the B709, a quiet road with the occasional vehicle. The road gently climbs out of Innerleithen, alongside the local golf course before taking you up through the Moorfoot Hills. It wasn’t as steep or as high as the Devils Beef Tub on the previous day and sometime later we arrived at the viewpoint looking out over Edinburgh and the Pentland Hills.

The run down from the viewpoint wasn’t particularly steep but was fast and smooth before we turned off the B7007 and followed the NCN1 over to Carrington where we stopped for lunch – there are no obvious coffee/tea stops on this part so bring your own lunch or push on to Dalkeith. 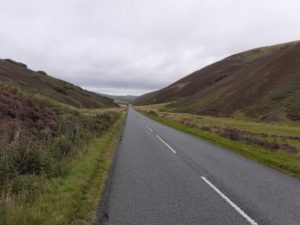 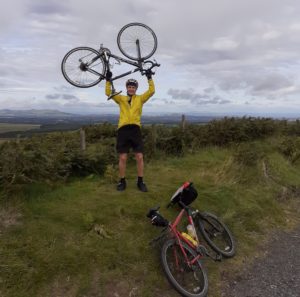 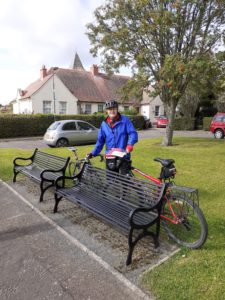 Heading on to Dalkeith, we lost the route slightly and the roads were busy so we just headed up the High Street and into Dalkeith Country Park, passing by Dalkeith Palace and the Stableyard complex (possible coffee stop?). We had no issues getting out the park at the other end and rejoined the NCN1and then the NCN76 into Musselburgh. As you leave the cycle path to join the road in Musselburgh, the route gets a little complicated. Watch out for the wooden bridge on your left, use it to cross the river and then cross the road junction to Eskside West before following the cycle path on the other bank of the river before finally arriving at the sea. As before, the signs are perhaps not always clear or easy to spot but the map and instructions in the book keep you right.

At this point we turned west along the promenade at Musselburgh, Joppa and Portobello. The wind was blowing from the west so we were now riding into a headwind which would stay with us for the rest of the route – however it had remained dry all day! We rewarded ourselves at a café on the front at Portobello with tea and fruit scones to help us with the headwind and the final leg. 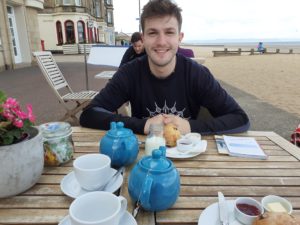 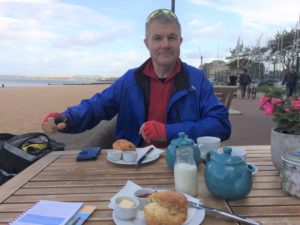 Passing on through Seafield and Leith we moved away from the sea (and the wind) for a few miles on smooth cycle paths before meeting up again with the sea just to the east of Granton. This was the first time we spotted the famous red metalled Forth Rail Bridge, the end was in sight!

We followed the shoreline through Silverknowes right along to the access point for Cramond Island (via a tidal causeway) where we then had to climb up the hill to skirt round the River Almond and into the Dalmeny Estate. The ride through the Dalmeny Estate has the last few short climbs and descents (and probably the roughest surface) of the trip before bringing you out on the seashore just below the Forth Rail Bridge and the finish point at the pier. 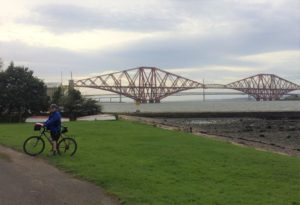 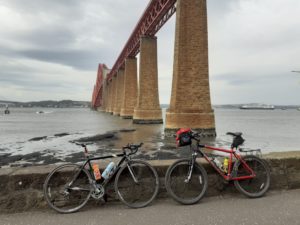 Overall the road surface was pretty good although those on road bikes and skinny tyres may want to think about taking the alternative NCN1 finish given in the guidebook in order to avoid a few miles of rough gravel tracks in the Dalmeny Estate which are similar to what you would find in forests – that part felt bumpy even on a hard tail.

To summarise, we found it a great trip from one coast to another, passing through lots of lovely countryside and the Edinburgh area. It is reasonably well signposted from south to north although I think we may have struggled at parts without the guidebook.